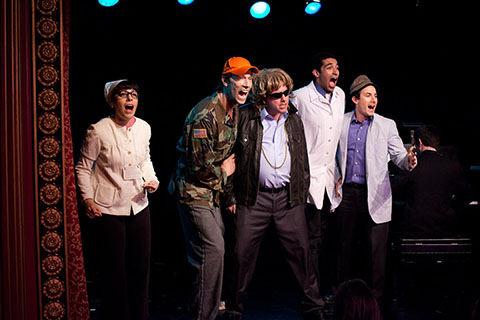 ‘Broadway’s Next H!t Musical’ hits the stage at the Kirbo Center Auditorium in Bainbridge on Jan. 31

Comedy and music come together to provide entertainment like no other at “Broadway’s Next H!t Musical” presented by Abraham Baldwin Agricultural College at Bainbridge.

This unforgettable evening brings new songs, new scenes, and a new experience to the Kirbo Center Auditorium in Bainbridge at 7 p.m. on Jan. 31.  The musical features a hilarious, unscripted awards show that is sure to bring the audience lots of laughter.

“Broadway’s Next H!t Musical” encompasses an interactive performance as members of the audience give suggestions of hit songs for the cast to perform. After the compilation of hit songs, the audience votes for its favorite song, which will be transformed into a remarkable, improvised musical scene.

Directed by improv veterans Rob Schiffman and Deb Rabbai, this noteworthy production is sure to be an unforgettable night for all as a part of the Carter Arts and Lecture Series.  The event is open to the public at no admission cost.

For more information on any of the productions, interested persons can call (229) 243-3160, email Harper at jennifer.harper@abac.edu or visit the Carter Arts and Lecture Series on Facebook.