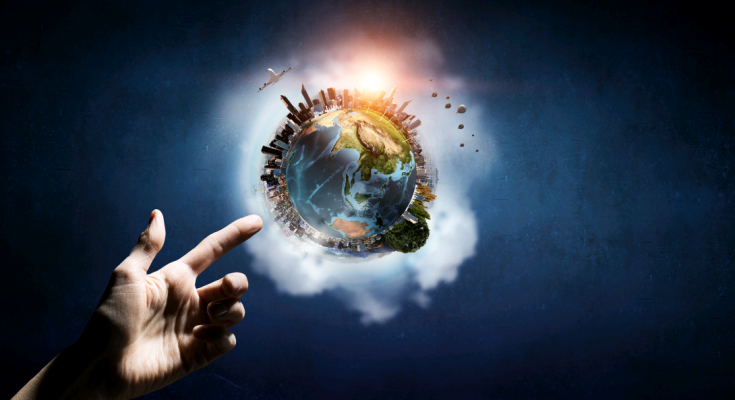 The Bible (KJV) says, “And the angel which I saw stand upon the sea and upon the earth lifted up his hand to heaven, and sware by him that liveth for ever and ever, . . . that there should be time no longer” (Rev. 10: 5, 6).

Time began at the time of creation, when each day of creation was begun and ended and the creation process advanced to the next day. The time it took for all things to be created was six days. The sun at the center of our universe made us aware of passing time and we learned how to measure seasons, days and years by our passing around it (Gen. 1: 14). From there we have come to where we can divide time up into small increments and measure time in split seconds.

“In the Creation account, God had to have some place to put matter so He created space.  He had to make room for motion so He created time. . . . time is the medium in which things change. . . . In order for change to occur, there must be a sequence of change.  We call that sequence time.” – (A.W. Tozer)

The word “time” is first used in Genesis 4:3. “And in the process of time it came to pass, that Cain brought of the fruit of the ground an offering unto the Lord.”

“The process of time” means the forward movement or the advance of time. From the time of creation to the time of Cain’s offering, time had advanced or proceeded forward.

Time always moves forward. It flows in one direction. It flows out of the past into the present and on into the future.

If time flows, at what rate does it flow? “At the rate of one second per second.” “Flowing is a process that takes time; time cannot itself take time.”

Time travels in a line or is linear, as first introduced by Christianity, and embraced by science, and not circular, as espoused by most religions of the East, with their belief of karma and reincarnation. History is the record of events that took place on a time-line.

Events happen in time. Events involve people, places, and things. Events do not happen haphazardly. They happen on time according to God’s timing, for He is in control of time and events. And the Bible reveals that God’s timing is perfect.

According to the Bible there are certain events that when they occur we can know what time it is according to God’s timetable. The Bible reveals God’s story-line and the knowable end of time.

God is using time and events to bring to completion His plan of judgment and redemption. When His plan is fulfilled there will be no need for time and time will be no more in timeless eternity.

Time had its beginning,
For time hasn’t always been.
God made time to measure motion,
For the world He made back when.
Time was first measured by the sun,
As the earth passed around it.
We became aware of days, and years,
And the seasons time brought with it.
Time is the medium in which things change,
The order in sequence in which change occurs.
Before time was clocked by days and years,
Now we time things before they occur.
The word time is first used in the time of Cain,
Just before Abel his brother he slew.
But time has moved forward and advanced.
Flowed forward to the present with me and you.
Now is an increment of time for today.
Tomorrow is now to come,
Yesterday is the now that’s no longer here.
Christ tells us that now is the time to come.
Time travels in a straight line,
Time is linear and history to.
Events take place on a time-line,
The idea of circular time is not true.
As time had a beginning,
Time will also have an end.
Time that once started in time,
Will also one day end in time.
We look at the world and not our clocks,
To see what time it is.
The Bible reveals God’s story-line,
And we see how close the end of time is.
James H. Cagle

One Comment on “The Beginning and Ending of Time”