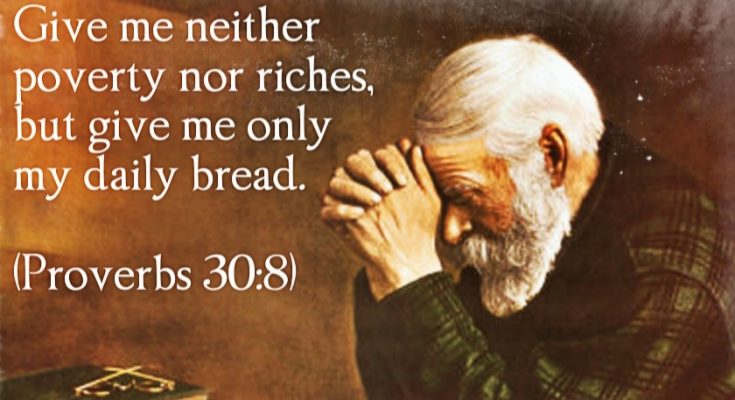 The Bible says, “Two things have I required (to inquire, to request) of thee, deny me them not before I die: remove far from me vanity and lies: give me neither poverty nor riches; feed me with food convenient for me: lest I be full, and deny thee, and say, Who is the Lord? or lest I be poor, and steal, and take the name of my God in vain” (Pr. 30: 7-9).

In these verses we have the only prayer in the book of Proverbs. This prayer was written by Agur (v.1).

In his prayer Agur first requested that God remove all vanity and lies from his life. By requesting this Agur was making it known that he didn’t want to waste his life on things that wouldn’t matter two seconds on the other side of eternity.

Agur then asked God to deliver him from the two extremes, to give him neither poverty nor riches, but to give him what was convenient for him. The word “convenient” means what is suitable, agreeable and appropriate, or making things come together. In other words give him his daily bread and help make ends meet.

Agur, wanted this middle road of completeness and contentment because in it he would not face the temptations that he would face if he were rich or poor.

Agur knew that if he were rich he would face the temptation that all rich people face, that of getting a false sense of security and becoming independent of God and then turning their back on Him and denying they ever knew Him. Agur obviously saw this happen to others and prayed that it wouldn’t happen to him.

The warning of forgetting God after He had blessed them and they were full is given to Israel in Deuteronomy 6: 10-12. An example of how the rich think they do not need God is found in Job 21. The church of the Laodiceans give us an example of being materially rich but spiritually bankrupt (Rev. 3:14-22).

Agur knew if he were poor he would be tempted to steal in order to make ends meet. Stealing would be breaking the law and would bring dishonor upon the name of God. Agur obviously saw this happen to others and prayed that it wouldn’t happen to him.

Agur simply asked God to put him in the middle-class so he wouldn’t experience the temptations that the rich and poor experience, which temptations if yielded to, would harm that which was so important to him, his relationship with God.

The Smell of Rain
(Job 14: 9)
As I stepped outside to sit in my swing
The smell of rain was in the air.
The air was heavy with her perfume,
I knew she was coming but not from where.
A cloudless sky gave no clue.
There was no sign to signal her advance.
But the wind that blew off her hair and neck
Told me she was near to making her entrance.
The sparrows smelled the rain and tweeted,
Elbowed each other and pointed to the sky.
They knew they’d soon be splashing in puddles
Until they were so wet they couldn’t fly.
The rains perfume is always exotic.
It smells of violets, fresh linen and cascades,
With a very small pinch of pixie dust
She carries in a locket,- special made.
The smell of rain awakens the forest,
The trees clap their dry brittle hands.
Flowers turn their silver cups upward,
And beast lift their faces in the pastureland.
The smell of rain reaches the farmer
As he turns his plow into the wind
He knows his prayers have been answered
And that the drought has come to an end.
The scent of rain reaches the city
Through the streets her perfume comes.
Her fragrance blows down ever’y alley and street,
As she descends on commuters heading home.
She’s often accompanied with lightning,
And clothed in thunderclouds all around.
She dances all above and about,
And yet she always touches the ground.
Her noble essence glides through the forest.
She refreshes the dry thirsty field.
The freckled-faced daisy is gladdened,
And the streams and lake and rivers she fills.
She turns the country dirt road into mud,
She soaks the clothes hanging on the line,
She washes the sidewalks and street clean,
And makes the skyscrapers shine.
I stand out in the falling rain
Until I’m drenched in her perfume.
My hair, neck, and clothes smell of rain.
Her fragrance drips off me as I head to my room.
Whenever I catch the smell of rain,
I know she’s coming and watch her pass through.
For there’s no mistaking the smell of rain,
Though it’s very old, it’s refreshing and new.
The rains power, beauty and perfume,
She gets from her Creator in Heaven above.
He sends her dancing all through the land,
To show us His  mercy, care, and love.
James H. Cagle