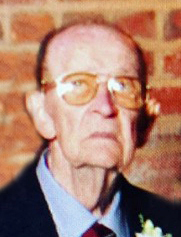 Jack Edward Linn was born in Alger, Ohio, son of the late Langford Eugene Linn and Clairmond Cochran Linn. Jack was joined in marriage to the late Anna Elizabeth (Betty) Dawson on the 15th of October 1948. They had two sons, Carter E. Linn (Angela, the daughter he never had), and Nalon Linn, that they were very proud of. He leaves behind a brother, Joe Linn of Lady Lake, Florida, and a sister, Norma Jean Hale of Leesburg, Florida. He was preceded in death by a brother, Major Linn of Alger, Ohio. He leaves behind four grandchildren, Angela Harrington (Stephen), Jack E. Linn, II (Amanda), and Jade and Lauren Linn. He was blessed with ten great grandchildren, three great, great grandchildren, and many special nieces and nephews.

Jack was a World War II veteran who served in the Army Air Corp from 1944-1946. He worked as a general foreman for twenty- five years and retired from Rockwell Int. He was an avid hunter and fisherman. Jack entertained his family with many tales of his life’s journeys and his superb baking treats. He will be missed by everyone he touched.

A graveside service, with military honors, will be held Wednesday, 2:00 p.m., Preston Cemetery, in Alger, Ohio.