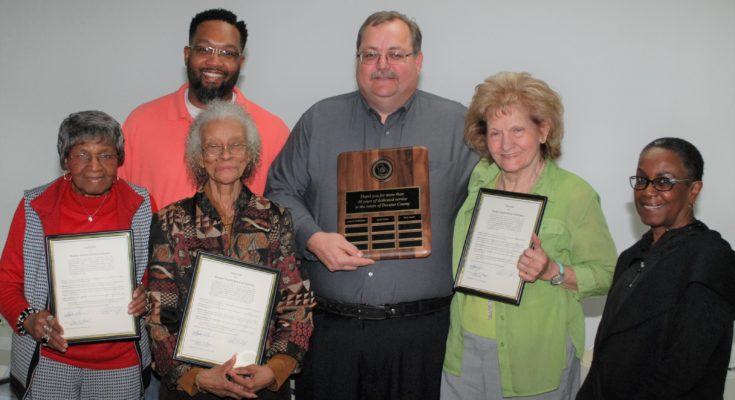 Photo submitted
Longtime poll workers Anna R. Washington, Mary Jacobs and Janelle Nelson, pictured from the left, are holding their copies of their resolutions marking their remarkable service and dedication to Decatur County voters for more than 40 years. With them, from the left, are Board Vice Chairman Willie Lamb, Board Chairman Wendell Cofer and Board Member Beverly Holmes, who is a daughter of Ms. Washington. Another daughter of Ms. Washington’s, Georgette Burke, also serves as a poll worker, mainly in the Brinson precinct.

The Decatur County Board of Elections and Voter Registration honored the three poll workers at the Board’s meeting held on Feb. 13, the location of which was changed to the Fairgrounds polling location on Vada Road following a poll worker orientation meeting.
The three were presented resolutions from the Board and their names were engraved on a plaque that will be at the Elections Office at the Courthouse Annex. Highlights of the resolutions for the three poll workers were as follows:

Janelle Nelson has worked elections in Decatur County since 1975, mainly at the Fairgrounds precinct. Nelson, who is still an active poll worker, has worked in various capacities, working part time in the Elections Office, poll manager and as a mentor and friend to countless others. Her experience and expertise of election procedures has been invaluable to her colleagues.

Mary Jacobs is the Coliseum polling location’s tireless greeter. Her smile has been her signature to the thousands of Decatur County voters who vote at the Coliseum.

Anna R. Washington, now retired, worked as manager or assistant manager at the Attapulgus polling location, and who ushered in her children to become active in the election process.