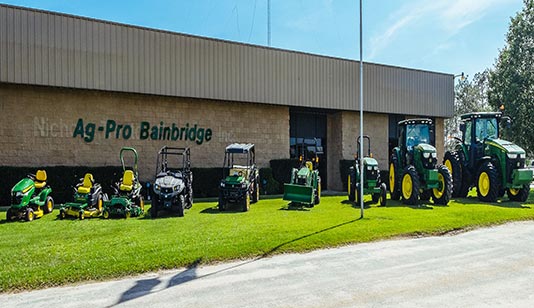 3) A white extended-cab truck, possibly a Chevrolet 1500, with a service truck bed

A gate on the west side of the building is shown being forced opened, allowing the two white trucks to enter the fenced area. The trailer, towed by the single-cab truck, is disconnected. That trailers, as well as two Ag-Pro trailers, are shown being loaded with zero-turn mowers and four-wheelers taken from the lot. The subject’s white single-cab flatbed truck is also loaded with stolen equipment. Two trailers are then attached to both of the subject’s trucks. The third trailer is attached to an AG-PRO crew cab truck, sitting on the lot. All three trucks are then driven through the gate, and onto Airport Road. The white passenger car joins the convoy, and they are last seen traveling west on Dothan Road.

Ag-Pro is offering a $10,000 reward for information leading to the arrest and conviction of the subjects involved in the theft. Anyone with information is asked to contact Investigator Chip Nix at 229-726-4119.