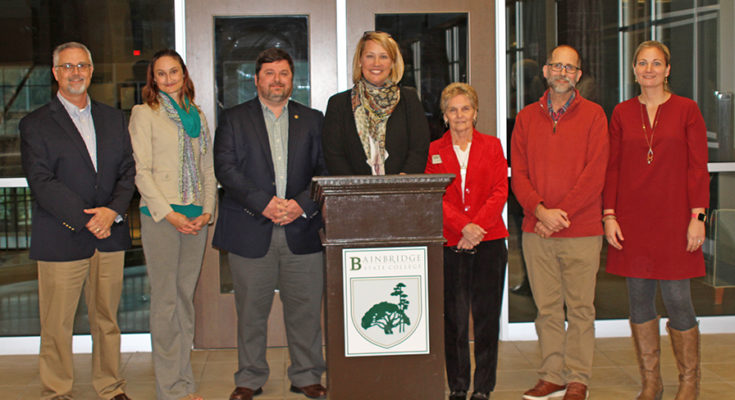 Photo (tenure promos 2017.jpg) The Bainbridge State College administration congratulates the four faculty members on receiving tenure and promotion. Left to right: Wesley Whitehead, Associate Professor of Mathematics; Dr. Emily Dowd-Arrow, Associate Professor of English; Dr. Michael Kirkland, Interim Vice President for Academic Affairs; Dr. Stuart Rayfield, Interim BSC President; Joan Simpson, Dean of Arts and Sciences; Dr. David Nelson, Professor of History; and Dr. Jenny Harper, Professor of Biology.
Bainbridge State College was pleased to honor four faculty members on Wednesday, Dec. 6, 2017, for being awarded either tenure or promotion.
Faculty being honored were Dr. Jenny Harper of Bainbridge, Dr. David Nelson of Quincy, Dr. Emily Dowd-Arrow of Tallahassee and Wesley Whitehead of Pansey (Ala.)
Tenure and promotion are considered high recognition for faculty members, and it indicates the faculty member has been successful in the classroom and in representing the institution.
Dr. Stuart Rayfield, Interim BSC President, congratulated the faculty by expressing her amazement of their accomplishments.
“I am in awe of each of your accomplishments—both in and out of the classroom,” she said. “Bainbridge State College is so fortunate to have you all teaching its students. Congratulations to you all for this very well deserved honor.”
Joan Simpson, Dean of Arts and Sciences, proudly recognized the faculty with either their tenure or promotion.
She said, “It is my honor to present these honors to a group of individuals who change the lives of our students each and every day.”
Dr. Jenny Harper began her career with Bainbridge State in 2007. She was promoted to Associate Professor of Biology in August 2012 and she was awarded tenure the following year. Dr. Harper has been promoted to full Professor.
The institution recognizes Dr. Harper’s dedication to her students as well as the BSC community.
Dr. David Nelson has been with Bainbridge State since 2008 teaching History. He was promoted to Associate Professor of History in August 2012 and he was awarded tenure the following year. Bainbridge State recognized his commitment to the success of his students and promoted him to full Professor.
His most distinguished accomplishments at BSC include his advisement of the Model United Nations (UN) Program, History Club, International Education and the development of the Scotland Study Abroad Program for the University System of Georgia (USG).
Dr. Emily Dowd-Arrow began her position as Assistant Professor of English with Bainbridge State College in August 2010. She was promoted to Associate Professor of English in August 2016. The College recognized her dedication and accomplishments by awarding her tenure.
Dr. Dowd-Arrow is the founder and advisor for Bainbridge State College’s first creative arts journal, Adroit, which gives students and the community another avenue to express themselves.
Wesley Whitehead joined Bainbridge State in 2006 teaching Mathematics. He was promoted to Assistant Professor of Mathematics in August 2013.
Whitehead teaches Mathematics on the main campus as well as in Blakely and Donalsonville. He has also served as Learning Support Director and Instructional Coordinator. Currently, he is writing his dissertation for his doctoral degree, which he is scheduled to complete May 2018.
Bainbridge State was pleased to promote Whitehead to Associate Professor and grant him tenure.
The Bainbridge State College community is pleased to have Harper, Nelson, Dowd-Arrow, and Whitehead as faculty members and congratulates them on a job well done.