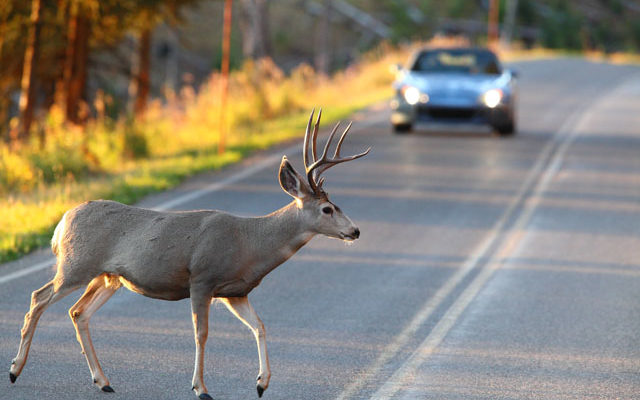 Watch out for deer on and near the roads! Motorists are urged to exercise caution during the fall as this is a time of peak deer activity, according to the Georgia Department of Natural Resources’ Wildlife Resources Division.

“Motorists should be alert and pay close attention to the roadsides as we are nearing the annual peak time of the year for deer-car collisions,” said Charlie Killmaster, state deer biologist with DNR’s Wildlife Resources Division. “Keep in mind that deer often travel in groups, so if a deer crosses the road ahead of you there is a good chance that another will follow. In many cases, that second deer is the one hit as the driver assumes the danger has passed and fails to slow down.”

There are two main reasons why drivers may see more deer along roads in the fall:

· Mating Season – Deer mating season occurs between October and late December, depending on location. Male deer go into “rut” and begin actively searching for mates. This behavior results in an increase in deer movement, bringing them across roadways.

· Time Changes – As we begin to “fall back” for daylight savings time, our days become shorter and nights become longer. Rush hour for most commuters tends to fall during the same hours in which white-tailed deer are most active – dawn and dusk.

Following are some tips and information to help avoid potential collisions:

· Deer Are Unpredictable: Always remember deer are wild and, therefore, can be unpredictable. A deer calmly standing on the side of a road may bolt into or across the road rather than away from it when startled by a vehicle.

· One Deer Usually Means More: Always take caution and slow down when a deer crosses the road in front of you. Deer usually travel in groups, so it is likely that others will follow.

· Time of Day: As deer are most active at dawn and dusk, they are typically seen along roads during the early morning and late evening – the same times most people are commuting to and from work.

· Time of Year: While deer-car collisions can occur at any time of year, the fall breeding season is a peak time for such accidents. During the fall breeding season, deer movement increases and this often brings them in contact with roadways that cross their natural habitats. Road shoulders generally provide beneficial food plants both during extremely dry times of the year and following a long, hard winter. Deer are attracted to these plants in late-winter, early spring and late summer. Georgia’s new deer rut map (http://georgiawildlife.com/rut-map) is an excellent tool for motorists to determine local peaks in deer movement. Drivers should be especially wary of deer during these time periods.

· Minimize Damage: If it is too late to avoid a collision, drivers are advised to slow down as much as possible to minimize damage – resist the urge to swerve to avoid the deer, as this may cause further damage, sending drivers off the road or causing a collision with another vehicle.

(Oct. 25, 2017) –Feral swine have become increasingly detrimental in Georgia, causing significant damage to agricultural crops and natural resources throughout the state. The economic impact of damage caused by feral swine in Georgia last year is estimated at $150 million. A group of agricultural and natural resource organizations are partnering together to bring Georgia’s top experts on feral swine together in a series of educational workshops for farmers and landowners in November and December. The partnering agencies will host five workshops and trapping demonstrations throughout the state on the following dates:

Topics will include disease issues, swine biology, economics, water quality issues, effective control techniques, transport issues, and regulations to be followed by a question and answer panel of experts. Each workshop will also include a feral swine trapping demonstration.

Registration for each event will be available at https://gooutdoorsgeorgia.com/ on the “Events” section. There is no cost to attend the workshops, but space is limited. Pre-registration is required. More details are available at www.GACD.us/events.