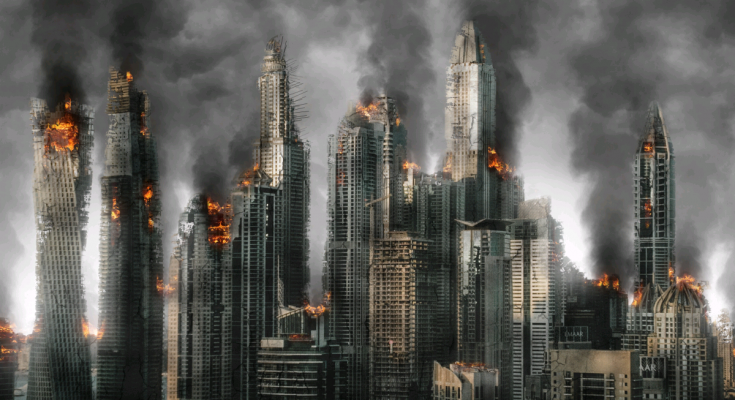 The Bible (KJV) says, “Where no wood is, there the fire goeth out: so where there is no talebearer, the strife ceaseth. As coals are to burning coals, and wood to fire; so is a contentious man to kindle strife” (Prov.26: 20, 21). “He that is of a proud heart stirreth up strife: but he that putteth his trust in the LORD shall be made fat” (Prov. 28: 25).

America is burning. Many want to see her burn. Many are keeping the fires stirred and fuel on the fire. Many think that in order to get what they want they must destroy everything America has. What these individuals don’t understand is that when they actually get what they want, they’re not going to want what they get.

The original fire that sprung up, and the passions that were inflamed, would have burned out had not others with their own personal agenda highjacked that incident and lit their fires by it and then fueled and fanned the flames.

Fiery rhetoric from proud contentious men keeps the flames burning. These social arsonists with words keep the passion of the rioters ablaze while they set our cities on fire. Others threaten to use this crisis to start their own fire unless they get what they want. Some of these social arsonists’ call themselves ministers of the Gospel. According to the Bible they’re proud contentious men. “A fool’s lips enter into contention, and his mouth calleth for strokes” (Pro. 18: 6).

It’s nothing but pure hate that’s dividing America, tearing her apart, and that is fueling these fires. “He that hateth dissembleth with his lips, and layeth up deceit within him” (Pro. 26: 24).

America is on fire only because the church is not on fire. The church is not on fire for God. She is cold, passive, apathetic, indifferent, complacent, and as many pastors have revealed, ready to capitulate, bow the knee and meet the demands of the rioters and protesters. She is ready to give up her God-ordained purpose (not that she has been fulfilling her God-ordained purpose) and carry out the purpose of the protesters.

America will continue to burn if fire doesn’t fall from Heaven and the church catch fire and experience a really God-sent revival. The words, “If my people, which are called by my name, shall humble themselves and pray, and seek my face, and turn from their wicked ways; then will I hear from heaven, and will forgive their sin, and will heal their land” (2 Chron. 7: 14), should set our hearts aflame and stir us to actions because there is hope and a solution for America’s many problems and that solution is a revived church.  Will the church sit still while America burns? America’s fate is in the hands of the church, not in the hands of politicians, and if she is destroyed her blood will be on the doorstep of the church.