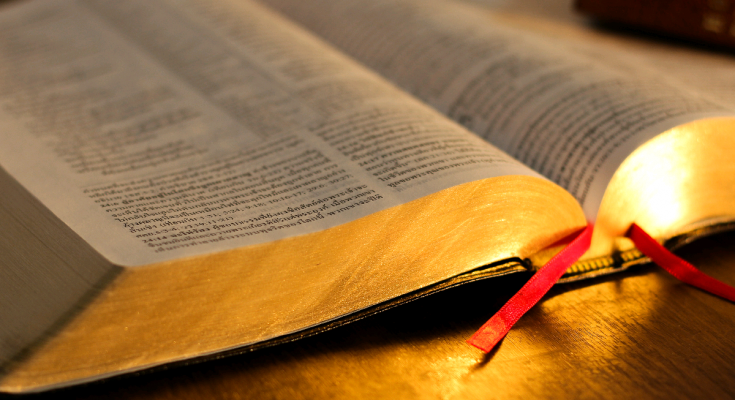 The power of the word is the primary power God has used through the centuries to make Himself known to the world.

Words are the medium we use to communicate to others our private thoughts. Unger says, “Words are the vehicle for revealing the thoughts and intents of the mind to others.”

A word is a visible or comprehensible expression of an invisible mind. A word is given intentionally as a revelation of a mind to take the relevance of that mind and make it relevant to another mind.

The Bible teaches that “the heaven and the earth” and everything in them, were spoken into existence by God (Gen. 1). God used words and with them took nothing and made something. God was the Cause, but words were the means or medium that in effect brought everything into existence. God used words to describe the images of His mind of how He wanted things to be and in their perfect likeness spoke them into existence in the physical realm. Everything preexisted in the mind of God before He created anything.

Though all creation is not today as it was originally because of the curse of sin, the Psalmist says it still speaks of its Creator. “The heavens declare the glory of God; and the firmament sheweth his handiwork. Day unto day uttereth speech, and night unto night sheweth knowledge (intelligent design). There is no speech nor language, where their voice is not heard” (Ps. 19: 1-3).

All the sights and sounds of creation have been translated into the language of the natural sciences that uses words, if the scientist is a creationist, that point to our Creator.

The Bible came into existence because God spoke in order to reveal Himself to man (Heb. 1: 1). God’s revelation of Himself produced the Bible. The Bible is a written revelation of God’s will for mankind (Ps. 19: 7-11).

Jesus, the eternal, only begotten Son of God became the Living Word in His incarnation. He was the perfect visible, human expression or image of the invisible God (2 Cor. 4: 4; Col. 1: 15; Heb. 1: 3). With the written word, words were used to create mental images in the reader of what God was like. This mental imaging could be flawed by the readers sinful nature and the influence of a sinful environment. But with Jesus, The Living Word, man had a perfect medium of revelation from God (Jn. 14: 9; 1 Jn. 1: 1-3). Those who repent and put their faith in Jesus Christ become epistles of Christ, read of all men (2 Cor. 3: 3).

God spoke the word and it was so,
All that’s something He created from nothing.
That which preexisted in His mind,
Appeared, and is still today continuing.
♢
That which was then only visible to Him,
Is now visible to us as well.
That which He saw with a word was revealed,
And now all creation His glory doth tell.
♢
Creation is a book of God’s works,
That does not tell of a Saviors love.
The Bible is a book of God’s words,
And reveals the love God sent from above.
♢
It is with God’s written Word,
That we understand His will and way.
Though His Person we cannot see,
We show His likeness when we obey.
♢
So if we trust Him and obey,
The unseen God is made visible to man.
We love and trust One we cannot see,
That His love and life may be seen by man.
♢
Jesus is the Living Word.
A visible image of the invisible God.
His words, deeds, and thoughts,
Were the words, deeds, and thoughts of God.
♢
The power of the word, God’s used,
To communicate to us His heart.
Through His words we see His Person,
If we believe them in our heart.
♢
So take His words quite literally,
He means every word He said.
Listen, as all creation speaks,
To the Bible, and what Jesus said.
James H. Cagle