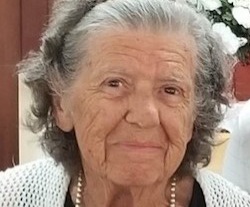 Eugenie (Genie) Porter Whiddon, age 96, passed away Saturday, May 16, 2020, at Memorial Hospital in Bainbridge, Georgia. A private funeral mass will be held at St. Joseph Catholic Church, Tuesday, May 19, 2020. Fr. Dave Hamm, S.T. will officiate. A private interment will follow in Roselawn Memory Gardens. The services will be streamed live on Facebook (Cox Funeral Home of Bainbridge). Services are held privately due to the COVID-19 pandemic.

Eugenie (Genie) Porter Whiddon was born May 18, 1923 in Berlin, Wisconsin. Her parents, Harold Aldrich Porter and Helen Lubieniecki Porter, have preceded her in death. She met Roy Whiddon while he was stationed in Wisconsin during World War II. They were married in 1947. Roy preceded her in death in 1988. In 1955 she and Roy moved to Bainbridge, Georgia, where they raised their children. The couple had 10 children. Genie worked as a telephone operator with Midwestern Bell and, then, 36 years at Southern Bell. She was a member of the Telephone Pioneers of America. Genie gave of herself freely. She worked hard for her family, church, and community. Genie began helping with Girl Scouts in 1957. She has held just about every position in the Girl Scout organization. Mrs. Whiddon served over 50 years and is a “life member”. Genie was involved in whatever involved her children, including the Bainbridge Swim Team and Bainbridge High School Band Boosters. She served 37 years with the American Legion Post 62 Auxiliary and was active in the local Red Hats Society. Genie dearly enjoyed her Tuesday canasta card group. Mrs. Whiddon served with a local crisis agency that helped stranded motorists or hungry families and on the board of the United Way.   Genie was a dedicated member of St. Joseph Catholic Church. She deeply loved her church and served in any way she could. She worked hard on the Council of Catholic Women and, in 2018, the Diocese of Savannah awarded her the prestigious Gartland Award. Genie was avid about water aerobics and was an instructor at the Bainbridge YMCA.