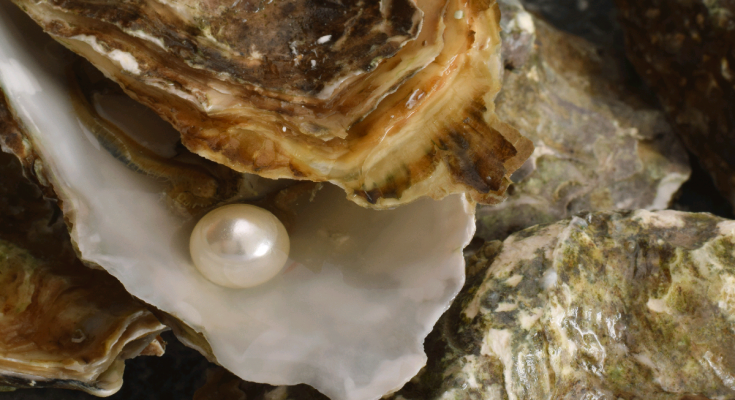 The Bible says, “And the twelve gates were twelve pearls: every several gate was one pearl: and the street of the city was pure gold, as it were transparent glass” (Rev. 21: 21).

Starting with Revelation 21, John begins describing what is called in escatology, the eternal state. The Tribulation period is long past. The Millennial, that thousand year reign of Christ, is over. The final judgment of the wicked lost at the Great White Throne Judgment and their being cast into the Lake of Fire where Satan and his angels are has recently been accomplished.

In chapter 21 John sees the New Jerusalem coming down out of Heaven to a new heaven and a new earth. An angel, one that had participated in the vial judgment (v.9) escorted John through the city, and gave him a tour of the city, and with his measuring rod revealed the size of the city, its gates, and its walls (v. 15).

The New Jerusalem already exist. This we know because John has seen it though it be in a vision. There is a city called the New Jerusalem that fits the description of the one in Revelation 21.

The city has twelve gates with the names of the twelve tribes of Israel on each one of them. The city has twelves foundations with the name of one of the twelve apostle on each one. There are the names of Jews on the gates and the foundation of this city.
The gates to the city are never shut during the day (v. 25). And since there is no night the gates are never shut.

The gates are made of pearl. They are not made up or constructed with many pearls but each gate is one pearl.

God could have made the gates of gold, or silver, or any other precious metal, or of gems as He did the foundations, but He chose to make them of pearl for a reason.

First of all pearls are symbolic of purity and perfection. That doesn’t mean that everyone who wears pearls is pure and perfect. The false religious system that will exist during the Tribulation is depicted as a harlot that among other things is adorned with pearls (Rev. 17: 5).

Jesus though was and is pure. He was the sinless Lamb of God. He was pure in His purity, holy in His holiness, clean in His cleanliness. He was without spot or blemish.
Secondly, pearls are made as a result of years of suffering. “Natural pearls result from an accidental inflammation of the mollusk’s mantle (fleshly body wall), often caused by a tiny parasite or grain of sand. Certain cells of the fleshly mantle secrete nacre to enclose the irritant and protect itself. After many years of suffering in this manner, the layers of nacre form a pearl of great value.”

And when the saved enter that New Jerusalem through the gates of pearl they’ll remember the sinless Son of God Who left Heaven to come to a world of sinners to suffer and die for them.

To Make A Pearl

The forming of a priceless pearl
Is wrought in secret, where men can’t see.
Between the shellfish’ ladened palms;
On the floor of the deep billowing sea.
Affliction is the main ingredient,
Rich lustrous beauty is created through pain.
This purest beauty comes through suffering,
Such wisdom of God we just can’t explain.
One grain of sand in the shells flesh
Is the seed that germinates the coveted prize.
Through sore affliction it’s slowly fashioned,
Until a pearl, most precious, is realized.
Similar is Gods working with us
When He=s refining and molding a saint.
As through His hands, He lovingly brings
Sorrow and grief, our soul to acquaint.
The priceless pearl cannot be made
Until an offence first enters the shell.
That creation of matchless beauty
Came from one on whom much suffering fell.
The shellfish’ pain generates the substance
To create a rare and priceless pearl,
Likewise, our Lord, when we are in pain
Supplies the grace that fashions His pearl.
Without affliction there would be no pearls
Nor would there be a godly man.
For pain is essential in creating a pearl
As well as many sorrows, a godly man.
Our Lord we know was a man of sorrows
And well acquainted with grief
He knows therefore what we’re able to bear
And He knows when to bring us relief.
A godly man is molded by affliction.
Christ’ beauty is created in him through pain.
He suffers in ways that most men can’t see
Until God’s pearl is the worlds gain.
Remember now when you see a pearl
That you’re seeing triumph over trial,
You’re seeing victory over affliction,
And know on God’s face there is a smile.
So, endure your painful afflictions
And remember that God is making a pearl.
As His love and grace are sealed upon you
You’ll show His beauty to a sin-sick world.
James H. Cagle