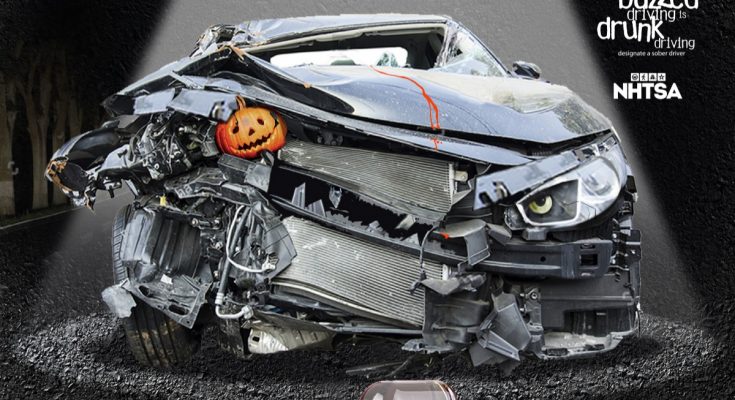 The Governor’s Office of Highway Safety is warning Halloween motorists that being taken to jail on a DUI charge is going to be a lot scarier than any haunted house if they make the decision to drink and drive.

Law enforcement statewide will be increasing their DUI enforcement on Halloween night because fatal drunk driving crashes have unfortunately become a national tradition for the costumed holiday. Data from the National Highway Traffic Safety Administration shows 42 percent of all people killed in traffic crashes on Halloween night from 2013 to 2017 were in crashes that involved a drunk driver.  Between 2013 and 2017, there were 158 drunk-driving fatalities on Halloween night, which is classified as from 6 p.m. on October 31 to 6 a.m the next morning.

Younger drivers are the most at risk even though it is illegal for those under 21 to consume alcohol. In 2017, those drivers under the age of 21 had the highest percentage (45 percent) of fatalities in Halloween night drunk driving crashes.

“What should be frightening on this Halloween week is we still have people who think that it is okay to get behind the wheel of the car after they have been drinking,” GOHS Director Allen Poole said. “In this day and age, there are far too many options to help drivers get home safely if they’ve been drinking. Choose a designated driver ahead of time, use a rideshare service, call a taxi or use public transportation.”

While the latest crash data from the National Traffic Safety Administration shows that the number of traffic fatalities in Georgia in 2018 decreased by two percent compared to 2017, the number of alcohol-related crashes increased.  There were 375 people killed in alcohol-impaired crashes last year, which is a five percent increase from the 356 deaths in 2017.

In Georgia and all states but Utah, it is illegal to drive at a blood alcohol concentration of .08 or higher. Despite that,10,874 people were killed in drunk driving crashes in 2017. Even if a drunk driver is lucky enough not to kill anyone while impaired behind the wheel, the financial consequences can be tremendous. A DUI can cost up to $10,000 in attorney’s fees, fines, court costs, car towing and repairs, higher insurance rates and lost wages.

“Drunk driving is a choice and you should never choose to put yourself or others at risk,” Director Poole said.  “Halloween is one of those occasions that requires planning, and if alcohol is part of your plans, then plan for a sober ride home before the party begins.”

It is also just as important for parents and their trick-or-treaters to safely prepare for an evening of hitting the streets for a sugary bounty. If walking, everyone should stay on sidewalks and avoid walking in the street if possible. If no sidewalks are available, walk on the left side of the road, facing traffic. And as always, all pedestrians should look both ways before crossing the street and do so only at crosswalks and street corners. Never cross between parked vehicles or mid-block.

The good news is there are lots of easy ways for both motorists and trick-or-treaters alike to have a safely memorable Halloween:

For Trick-or-Treaters and Parents

For Motorists
For more information on the Governor’s Office of Highway Safety, visit www.gahighwaysafety.org and visit us on our social media pages at the links below