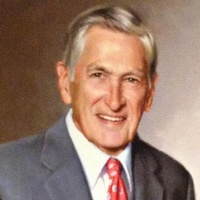 Bruce Wheat Kirbo, 88, was born February 5, 1930 in Bainbridge, GA, the son of Ben Kirbo and Ethel West Kirbo. He passed away Saturday, December 22, 2018, after a lengthy battle with Alzheimer’s. Family members were by his side.

A graduate of Bainbridge High School, the University of Georgia and the University of Georgia Law School and a fan of the Georgia Bulldogs, Kirbo practiced family and corporate law. He was a devoted and long-time volunteer. His involvement went far beyond his close-knit community to numerous organizations throughout the State of Georgia and beyond. Kirbo was the senior practitioner in the South Georgia circuit. He entered the University of Georgia at the age of 16, and earned a law degree in 1951 at the age of 21. While at UGA, Kirbo made a mark as a student leader, he was a member of Blue Key and Gridiron, president of Demosthenian, and served two terms of service on the law school’s honor court. He was admitted to the Georgia Bar just a few days after his 21st birthday and, after two years of service in the military, began his successful private practice in Bainbridge. During his distinguished career, Kirbo has served as a member of the board of governors and other committees of the State Bar, as a special master for the Supreme Court of Georgia as well as a member of the School of Law’s Board of Visitors. He was inducted into the American College of Trial Lawyers in 1979 and became a Fellow of the organization.

Kirbo led a lifetime of leadership, service and philanthropy to his local community. He represented the Decatur County School Board, Bainbridge City Council, served as a member of the executive board of the Bainbridge College Foundation, and as president of the Kiwanis Club.

The funeral service will be 11:00 a.m. Monday, December 24th at First Christian Church in Bainbridge Georgia. Interment will follow at Oak City Cemetery with his grandchildren serving as active pallbearers.

On-line condolences may be made at www.iveyfuneral.com.