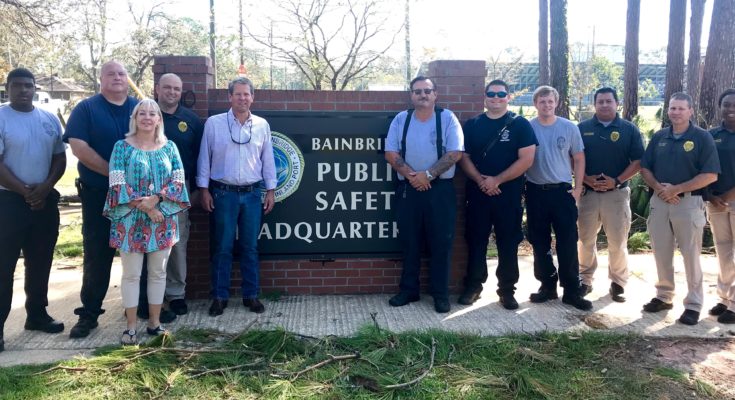 Kemp was also here to thank local and state first repsonders and emergency crews on all the hard work and dedication during and after the widespread destruction of Michael.

Kemp was asked a few questions concerning the aftermath of Hurricane Michael.

What is on your mind coming down here?

“I was in five southwest Georgia counties on Saturday and I wanted to come over today to check on the elections officials because I’d heard Bainbridge got hit hard, like a lot of other places, but they’re up and running good.”

“There are hard-working people over here making do with a generator and people are voting this morning. I’m sure the turnout will be spotty as people here are trying to get the power back on and deal with destruction of their homes and their crops.

“That’s one reason I’m here, but the other one is just thanking people for how hard they’re working to help the local citizens. Very impressive response at all levels that I’ve seen all throughout southwest Georgia.”

The response has been incredible down here. What do you attribute that to?

“Well I’ll say two things, I mean when it’s not good, you hear it from people, and I’ve heard how impressed people are about how many people are on the ground and the resources from the state and the feds.”

“They got the response down pat at the state level. Homer Bryson and GEMA, The Forestry Commission is involved, Department of Natural Resources. You have DNR rangers down here, you have state troopers, you have fire departments from all over the state that are coming in here to help their fellow man and fellow department.”

“You’ve got faith-based and nonprofit agencies that are in here helping with meals and showers and distributing water. I mean, it’s impressive to see, it makes me proud to be a Georgian.”

What message do you have for the people that are still dealing without power and in subpar living conditions?

“I know the Governor has been telling people to be patient and that’s a hard thing for people to do when they don’t have power and their whole life has been disrupted.”

“That’s one thing, help is here, and it is trying to get to you. The other thing is they just need to know that we’re thinking about them and praying for them.”