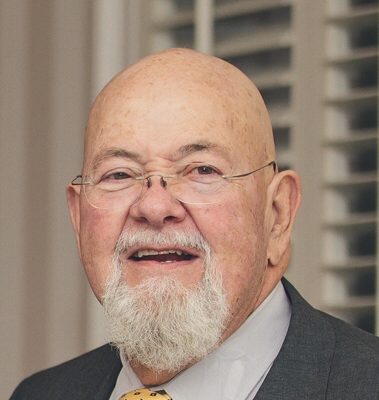 Douglas Wayne Hambrick was born January 6, 1942 in Shingler, GA, the son of James Everett Hambrick and Rebecca Long Hambrick. He was a graduate of Bainbridge High School, Class of 1961. Wayne attended Troy State University and Southern Technical Institute and graduated from National Institute of Technology. He was a mechanic by trade retiring from Chris BMW. Wayne was a member of Canton First United Methodist Church and a founding member of the Tuesday Night Supper Club in Bainbridge.

Described as “the perfect storm” or “a package deal”, Wayne Hambrick was a kind, gentle soul in a very intimidating body with a prank waiting to burst forth. His presence in a room commanded attention. He was thoughtful and quiet, a good listener. Wayne studied people which added questions to his curious nature. Wayne encouraged you to take risks and try things. He was a problem solver who loved a challenge and would not be defeated by a difficult task. Everything from email addresses to cards signed “2Ws” were evidence that his soul mate, Wanda, was a top priority. Wayne worked his way from Save Way (his father’s grocery store) to R.L. Rich Chevrolet, to setting up the first bus maintenance shop for Decatur County Schools, then as service manager for Shingler Motor Co. He co-owned three local businesses, Suzuki Fun Center, Baxter’s Shoe Store and JimWay. Wayne moved to north Georgia in the 80s to pursue his passion for mechanics working at GA Compliance Center and later at Chris BMW. Wayne could make something from nothing and felt that everything had a purpose and potential.

Survivors include his wife of 55 years, Wanda Harville Hambrick; his sister, Jane Hambrick Douglas and her husband, Bob, of Canton, GA; and his nephews, Jim Douglas, Bob Douglas, Wally Hambrick and Doug Hambrick. In addition to his parents, Wayne was preceded in death by his brother, Wallace Hambrick and his nephew, John Hambrick.