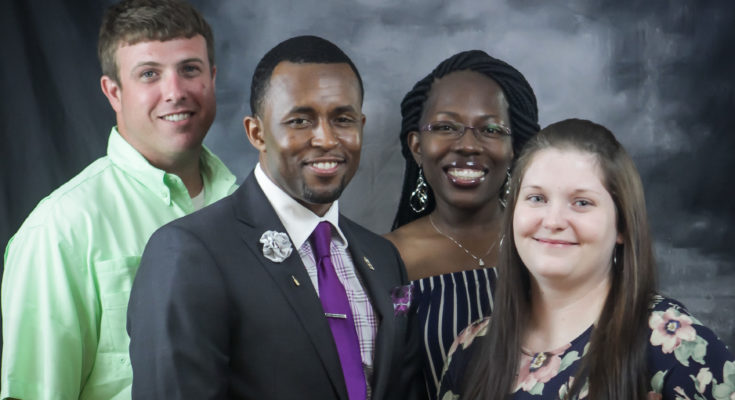 Recently, The Foundation of Southern Regional Technical College recognized the 2018 Distinguished Alumni Award Winners during the foundation’s annual Dueling Pianos event in Moultrie, Georgia. Those recognized were Keizzie Collins of Moultrie, Jonathan Harvin of Moultrie, Fergus Robinson of Cairo, and Hannah Wisenbaker Castleberry of Moultrie. Each of these Distinguished Alumni embody excellence in technical education and beyond. The four represent career successes in a wide and diverse range of fields, including medical, industrial, design, and business.

When Keizzie Collins started her college career, she was a young single mother of two who had dropped out of high school. She was a statistic, but she had a grandmother who saw her heart for caring for other people. Her grandmother had told her when she was a little girl that she was meant to be a nurse and to take care of other people. With her grandmother’s words tugging at her heart, Keizzie decided to break the cycle for herself and her sons. At the former Moultrie Technical College, Keizzie earned her GED, and then began building her education towards her goal of becoming a nurse. She became a Certified Nursing Assistant, then a Medical Assistant, then a Licensed Practical Nurse. By the time she earned her LPN, Keizzie was a married woman with four children and a very busy career. She wanted to live as an example for her kids, and had already achieved more than she ever thought possible. But she could still feel her late grandmother’s words pushing her to keep moving forward. Her grandmother had believed in her, and prayed for her, even when she didn’t believe in herself. Keizzie knew that she wasn’t done yet. To fulfill her dream of becoming an RN, she enrolled in the ASN bridge program in 2015 at Southern Regional Technical College. On January 7th, 2017, Keizzie Collins officially became Keizzie Collins, RN. Recently, Keizzie was awarded the prestigious Daisy Award in recognition of her exemplary humanity and the extraordinary care that she provides to her patients at Colquitt Regional Medical Center. Mrs. Collins credits her late grandmother with inspiring her to keep pushing towards her goals, and technical education with the fantastic career that she now has. She now feels the pull to inspire and other young women who are growing up in bad situations to believe that it is not too late for them either, and that it is never too late to build a successful life for ourselves.

Jonathan Harvin’s professional career began even before he actually graduated from Southern Regional Technical College (Formerly MTC.) In 2008, Jonathan was the school’s GOAL student, representing excellence in technical education for the school that year. At that year’s GOAL Award dinner, his instructor, Lynn Tanner, approached him about an internship program at Sanderson Farms. Jonathan jumped at the opportunity. During that internship, he performed familiar mechanical tasks in the truck shop, and was given the chance to learn managerial tasks as well. He did well during the internship, and on March 24, 2008, just days after completing classes at the former MTC, Jonathan became a full time employee of Sanderson Farms. A year later, a job opened for a Skilled Maintenance position, and he took that opportunity as well. Because of his technical education, and especially his instructor, Lynn Tanner, Mr. Harvin excelled at a variety of tasks and continually found ways to go above and beyond for his company. He continued to climb the ladder of success at Sanderson. Soon, he was given the opportunity to become the Shop Supervisor of both Moultrie and Adel. Although a 25-year-old Shop Supervisor was unheard of at the time, his work ethic and diverse set of skills gave him a leg up, and he was offered the job. He became the youngest shop supervisor in the company at the time, as well as the only shop supervisor in the fleet to oversee two shop locations. He has now been with Sanderson Farms for 10 years, and credits much of his success to technical education. Jonathan Harvin would like to recognize Southern Regional Technical College and especially the late Lynn Tanner, who Jonathan says was actually more than an instructor; he was a great mentor and friend.

Fergus Robinson was born into a very challenging environment. His mother was a single 14-year-old girl, his father never became involved in his life, and his home was in what he calls one of the roughest neighborhoods in town. As a young boy, playing ball in the streets, he could look across an empty field at the edge of his neighborhood to see the more affluent neighborhood in the distance. He made up his mind as a young man that he wanted to build a better life for himself and his family. After taking a drafting class in high school, a dream of a career in the world of drafting and design began to take hold. While working the nightshift on a factory floor, Mr. Robinson began taking classes towards his Advanced Drafting Diploma at SRTC (formerly Thomasville Tech.) Before he completed his diploma, he was hired away from the floor and became a designer. After earning his diploma with SRTC, he continued on, and graduated with an Associate of Applied Science degree in Drafting Technology from Bainbridge College, a Bachelors in Management from Kaplan University, and just recently, he earned his MBA from Liberty University. While he was furthering his education, he was also continually moving forward in his career field. Fergus is now in Aftermarket Sales at Evoqua water technologies. On top of either inspiring his own five children, who are all currently in college or serving their county in the Armed Forces, Mr. Robinson has become devoted to supporting young people in breaking the cycle of poverty through education. Fergus is currently involved with the Kappa Guide Right program, which mentors young men ages 10-18. He is a volunteer Football Coach with the Grady County Recreation Department coaching ages 9-10. He serves on the Board of Directors for the Jackie Robinson Boys & Girls Club in Cairo, GA. He is a member of Fresh Start Global Outreach Ministries Calvary GA and Thomasville GA Alumni of Kappa Alpha Psi Fraternity Inc. Lastly, he is the Founder of the Young Men of Hope, which guides and encourages young men between the ages of 9-18. In 2016, Fergus Robinson was honored by the MLK Collaborative as the speaker and Grand Marshal for the MLK celebration for community service. He urges young people to think of technical education’s hands-on learning and small class size as an opportunity to get a jump-start on their education, and their lives.

Hannah Wisenbaker Castleberry began college while still enrolled at Colquitt County High School, taking part in the dual enrollment program. Her instructor, Rebecca Blalock, saw Hannah as a very bright, eager student who absorbed as much knowledge as she could. Mrs. Blalock says that as a high school student, Hannah incorporated a passion for baking and a dream of owning her own business into her assignments. As a dual enrollment student, Hannah earned her Entrepreneurship and Small Business Marketing Management Technical Certificate. Immediately after high school, she continued on the work towards her degree in Marketing Management. After graduating in 2012 from SRTC’s business program, Hannah went on to earn her culinary degree from Wiregrass Technical College, and then to open her own bakery in Colquitt County. Mrs. Blalock says that of all the students she has taught, she has never taught another student who was so determined to pursue a goal from such a young age. Hannah was incredibly focused and seemed to know exactly what she needed to be successful.

Her hard work and persistence has paid off, as she is now the owner of a highly sought bakery in her hometown. Loyal customers who stop in to get their favorite treat frequent her shop, Sugar & Spice Bakery in Moultrie. When she isn’t baking, Hannah now volunteers with the Moultrie Oncology Support Team, the local Humane Society, and the American Red Cross. Mrs. Castleberry says that technical education put her on a fast track to enter the workforce as a successful individual.

For more information on SRTC’s Alumni Association, joining the association free of charge, or nominating a distinguished alumnus, please visit our website at http://southernregional.edu/alumni-association, or contact the Institutional Advancement Office at 229-225-3977.

SRTC offers over 148 degree, diploma, and certificate programs that are designed to get you quickly into your desired career, and 27 general education courses that transfer to the University System of Georgia institutions and 19 private colleges and universities in Georgia. SRTC has instructional sites located in eleven counties across Southwest Georgia for the convenience of our students. The College is accredited by the Southern Association of Colleges and Schools Commission on Colleges (SACSCOC). SACSCOC is the regional body for the accreditation of degree-granting higher education institutions in the Southern states. For the most up-to-date information on registration, class dates, and program offerings, log on to www.southernregional.edu or call (888) 205 – 3449.