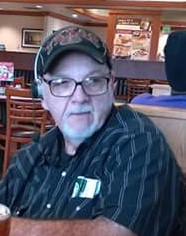 Mr. Eskro Adam Tramel, age 70, passed away early on Wednesday, July 3, 2018, at his home in Bainbridge, Georgia. Mr. Tramel was a truck driver for over 50 years. His last truck ride will be leaving the Cadwell Chapel of Cox Funeral Home at 10:00 a.m. in procession to his graveside service, Flat Creek Cemetery, Miller County, Georgia. Adam Tramel, Michael Tramel, Jr., Cody Fogarty, Ray Vega, and Timothy Peaster will serve as pallbearers.

Eskro Adam Tramel was born September 8, 1947, in Colquitt, Georgia, to Oscar Tillman Tramel and Willie D. Toole Tramel. Both of his parents have preceded him in death. Adam was raised in the Colquitt area. He married Patricia Brock Tramel, who has passed away. Adam loved truck driving and left that legacy with his children. He had 2 other loves in his life, Little Debbie snack cakes and his chewing tobacco. When not working, he enjoyed fishing. Adam Tramel will be deeply missed by his family and many friends.

Mr. Tramel is survived by his children, Adam Tramel and wife, Nancy of Oglethorpe, Georgia, Debbie Vega and husband, Ray of Ashburn, Georgia, Michael Tramel and wife, Gloria of Bainbridge, and Tonya Rogers and husband, Ricky of Oglethorpe; brothers, Jerry Tramel and Tony Tramel; sister, Dorothy Tramel; son-in-law, Ronnie Fogarty; 13 grandchildren; and 14 great-grandchildren. He was preceded in death by his parents, wife, and daughter, Melissa Fogarty.