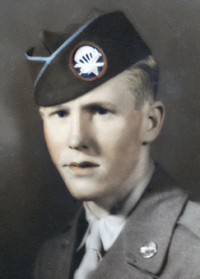 The graveside funeral service will be held at 11:00 a.m. on Saturday, October 21, 2017 at Mt. Pleasant Baptist Church Cemetery with Rev. Harold Burrell officiating.

The family will receive friends immediately following the service. Online visitors may sign the guest register at www.iveyfuneral.com. Memorials donations may be made to: Hospice of Southwest Georgia, 117 S. Donalson Street, Bainbridge, GA 39817.

Marvin Watson Joiner was born November 17, 1927 in Mitchell County, GA, the son of Thomas Watson Joiner and Irma Cleveland Meloy Joiner. He attended Pelham High School and left there to enlist in the U.S. Army. He achieved the rating of Parachutist and made over 80 jumps. He was honorably discharged in 1947. He received his Certificate of Attainment as an auto mechanic from Thomas County Vocational School in 1951, and was the owner and operator of Joiner’s Garage. He was a member of Union Grove Baptist Church, where his brother, Austin Joiner, was pastor for many years.

Survivors include his sister, Margaret Christine Joiner Cumbee of Charleston, SC; his nieces, Chris Brynes (Bill), Sheila Jones (Wayne) and Tina Braswell; his nephews, Thomas Joiner ( Ann) and Chris Cumbee (Sherri); and a host of great nieces and great nephews. He was preceded in death by his wife, Doris Eidson Joiner; his daughter, Ross Elouise Joiner; and his brothers, Austin Joiner and M.C. Joiner.