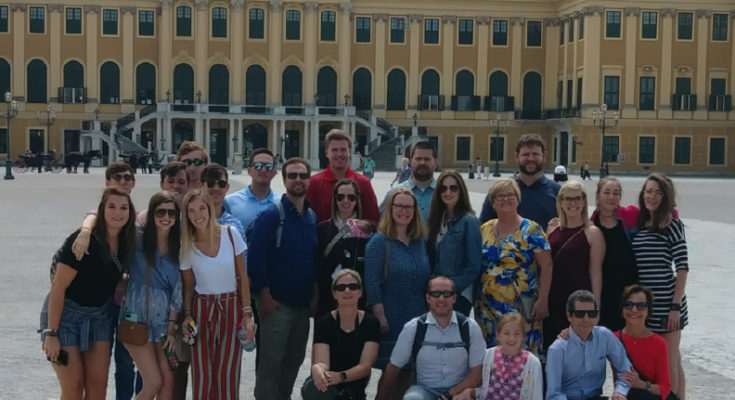 By Kendrick Long and Heather Steen

NOTE: On May 10, 2018, twenty-six students and faculty of ABAC at Bainbridge, as well as community members, flew out of Tallahassee International Airport and started their journey to Central Europe. Bound for adventure, a little nervous, but mostly excited, these intrepid travelers spent ten jam packed days in Hungary, the Czech Republic, Austria, and Germany. What follows is an account of the trip by two student participants, Kendrick Long and Heather Steen, both of Bainbridge.

Over the course of ten days, we visited four countries with very unique cities and people and experienced a wide array of culture and history. Throughout our adventures, we cruised the Danube, soaked in the thermal baths of Budapest, strolled through the palace courtyards of the mighty Hapsburgs, heard Mozart played in the halls of Vienna, tasted the famous Austrian cakes, crossed the statue lined Charles Bridge of Prague, wandered through the chilling remains of a German Nazi concentration camp, felt the subjects of Rembrandt breathe from their canvases, and climbed the Alps to Neuschwanstein Castle to walk across the mosaic floor of mad King Ludwig’s throne room.
​
After a day of traveling, we landed in the lovely city of Budapest, Hungary and met our tour director. Later that evening, we enjoyed a dinner of schnitzel and a stroll through the city. Then on day three our true Hungarian adventures began. Budapest is separated into a peaceful Buda and a lively Pest and eight spectacular bridges connect the two places across the Danube River. The uniqueness of this city was so intriguing. We spent the day touring the city with our Hungarian tour guide who took us across the Danube to the Buda bank to visit the charming Fisherman’s Bastion on Castle Hill. The towers of this neo-gothic terrace offered a stunning view of the beautiful Hungarian Parliament, Hungary’s largest building.

We then took a cruise along the Danube and were able to take in the sites of the magnificent architecture along the banks. We also had the opportunity to visit the city’s famous thermal baths. Later that evening, we visited St. Stephen’s Basilica and Dohány Street Synagogue, the largest synagogue in Europe. The thriving life of this city mingled with the ancient architecture and rich Jewish heritage created a very unique atmosphere.

On the next day as we traveled to Vienna, we stopped at the small Hungarian city of Győr. This charming city possessed such a peaceful atmosphere. The colorful buildings and lovely brick streets, which looked like they had been plucked straight from the pages of a storybook, were filled with local Hungarians going about their day. It was quite a drastic contrast to the touristy, bustling life of Budapest.

Later that day we arrived in the enchanting Vienna. Filled with spellbinding structures from the time of the mighty Hapsburgs. This city held a wonderful vibrancy and romantic flair. One of our first adventures in the city was a tour of Hofburg Palace, the former residence of the Hapsburgs. There we were able to see the lavish apartments of Franz Joseph and Elisabeth as well as the Imperial Silver Collection. It was amazing to see the extravagance in which these rulers lived.

We also visited Palmenhaus (Palm House) for coffee and their famous Austrian sachertorte cakes. We then had the opportunity to visit some of Vienna’s fabulous museums. The Kunsthistorisches Museum contained absolutely amazing art collections by numerous masters including Rubens, Vermeer, van Eyck, Raphael, and Rembrandt.

Day five was spent in Vienna doing some shopping and exploring the city more. We visited the Swarovski Kristallwelten Store and had lunch in an open-air market. We spent the afternoon touring the exquisite Schönbrunn Palace and the delightful grounds that surround it. That evening we had the chance to see St. Stephen’s Cathedral and to travel to the top of its 200-foot bell tower, which offered a breathtaking view of the city.

Often considered the symbol of Vienna, this beautiful Gothic structure with its colorful roof tiles was truly an impressive sight. Our Austrian excursions concluded with a wonderful Mozart concert that encompassed celestial music, opera and dance.

Day six found us leaving Austria and heading to the Czech Republic. Our lunch stop was in the riverside village of Cesky Krumlov. The Vltava River wraps serenely through the village and adventurous tourists enjoy kayaking its waters. Cesky Krumlov’s castle is the second largest in the Czech Republic. A climb to the top of its bell tower offered breathtaking panoramic views of the surrounding countryside. The castle boasts a live bear pit where a family of European brown bears reside and a 2,300 foot-long garden. We enjoyed exploring the cobblestoned streets, souvenir shopping and relaxing by the riverside. Back on the tour bus, we rode four more hours to arrive in Prague.

Our plans for day seven included touring Prague’s castle complex then crossing the Charles Bridge to explore Old Town. Prague is home to 2.6 million people. Nearly 80 percent of the country’s citizens live in the 22 districts that divide this capital city. Our day of touring was mostly in District 1, the oldest part of Prague.

Within Old Town we saw the famous Astronomical Clock that hangs at Old Town Hall. We wound our way through the cobbled streets to the Jewish quarter. There we visited some of the oldest synagogues in Europe, including Pinkas Synagogue, where upon its interior walls the names of 78,000 Czech Jewish victims of the Holocaust are inscribed. Just outside Pinkas was the tiny two-acre Old Jewish Cemetery. A dense forest of 12,000 headstones compete for space with most leaning against one another or a nearby tree in an orderly, yet imperfect, fashion.

Day eight began as we left Prague and headed to Munich, Germany. On the way, we stopped to visit Dachau Concentration Camp and Memorial Site. Dachau was the first of Nazi Germany’s camps and a model for the 3,000 camps to come. From 1933-1945–206,000 prisoners were interned there. A permanent exhibit documenting Dachau’s history, reconstructed barracks and guard tower, crematorium and religious memorials were all on the grounds for touring.

The tour was very emotionally moving. In fact, some of the exhibits videos and pictures were extremely difficult to view. Our tour guide spoke of the importance of these memorial sites. They serve to keep our history ever before us, lest we forget the atrocities and repeat our darkest times.

We began our tour of Munich, Germany on day nine. Our first stop was the BMW Museum where we had the opportunity to sit in various models and get a small feel for luxury vehicles. We strolled to the nearby Olympic Park built for the 1972 Games. The original stadium still stands and it’s architecture was considered revolutionary at it’s opening. Sweeping canopies of acrylic glass supported by metal rope resemble a huge circus tent.

A bus ride south brought us to Bavaria, Germany and the famous Neuschwanstein Castle built by crazy King Ludwig II in the late 19th century. Built as his summer palace, it was a spectacular showplace of Romanesque Revival architecture complete with towers, turrets, bridges and sweeping views from every window. Neuschwanstein Castle’s fairytale dimensions inspired Walt Disney’s design of the Magic Kingdom and Cinderella’s Castle.

Traveling to Central Europe with ABAC at Bainbridge was an unforgettable experience. The culture immersion, the camaraderie within the group and the lifetime memories are the most important takeaways. The good news for everyone is more trips are planned for the future and anyone in the community can join us; however, be forewarned, one trip may lead to another and another. Before you realize it, you have caught the infamous “Travel Bug.” We’ve caught the “bug” and we can’t wait for the next trip! If you have any questions about future travel abroad trips, please contact Dr. Jenny Harper, ABAC at Bainbridge Professor of Biology, at jennifer.harper@abac.edu. 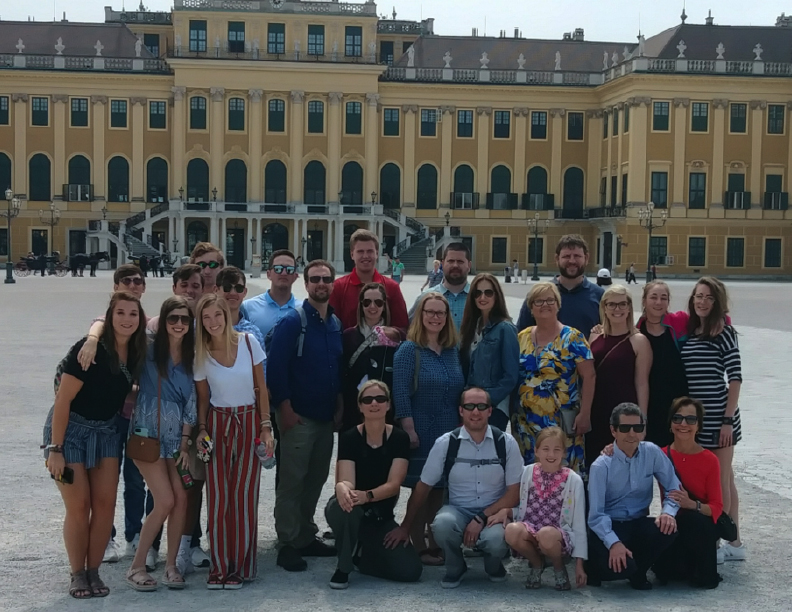