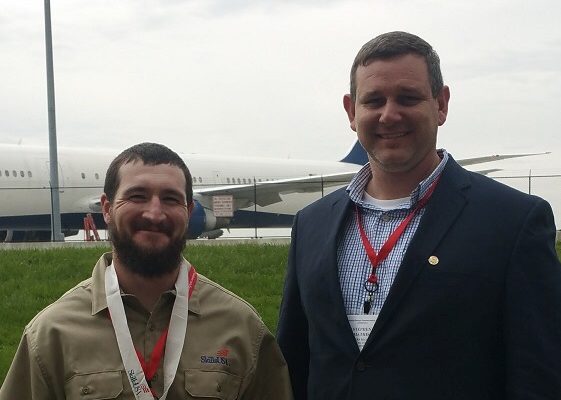 “I piddled around and fell in love with this,” Josh McDuffie said as he stands in the brightly lit electrical systems classroom. Fully stocked with coils of cables, walls of wiring projects in progress, and bins of assorted tools and fittings, the classroom looks like a cross between a construction site and aisle five of The Home Depot. While he is now perfectly at home in that environment, Josh’s path to the Electrical Construction and Maintenance program at Southern Regional Technical College was a winding one.

After serving as a Bradley Mechanic in the US Army, he never really found his footing in the civilian world until he decided to go back to college. At first, he went back to what he already knew. He started working towards his Automotive Technology diploma under the late instructor, Mr. Lynn Tanner. Like many students who studied under Mr. Tanner, Josh has warm memories of him. “Mr. Tanner was always busy, always working hard, but he also always made time for students.”

In the last semester of his automotive course, he took one Electrical Systems class just to round out his schedule. Suddenly, everything clicked into place. “I hit the ground running with Industrial Electrical Maintenance, and just liked everything about it,” Josh says, explaining that he enjoyed the hands-on problem solving of electrical work. “I was good at electrical trouble shooting in the Army, I just had that aptitude. I can sit there and read a book all day long. I don’t really know it until I get in there, roll my sleeves up, and do it.” Josh took every available electrical systems class so that he could earn both the construction and industrial specializations available at SRTC. “I try to learn everything I can… I like to be a jack-of-all-trades.”

Stephen Mathis, Electrical Systems Technology Faculty, says that he has been impressed by McDuffie’s work ethic. “The old saying that ‘there is no substitute for hard work’ holds true with Josh. He has worked harder than any student I have had in the last five years. He put in hours of extra work preparing for the SkillsUSA state competition and continues to do the same for the upcoming national competition in Louisville. It has been a pleasure to work with Josh and watch him grow in this field.”

In March, Josh McDuffie was named the 2018 SkillsUSA Georgia Post-Secondary State Champion in Electrical Construction Wiring. Additionally, Klein Tools named him the Outstanding Graduate of the year. McDuffie credits his training at SRTC for his success in the competition. “This school has been good to me. I appreciate the leadership that I received from Mr. Tanner in automotive, and now Mr. Mathis has taken me under his wing and has taught me so much. There were guys there who were four and five year apprentices. I’ve just barely been in class a year, but I was prepared.”

Later this month, Josh will travel to Louisville, Kentucky to compete in SkillsUSA’s 54th annual National Leadership and Skills Conference. While he is optimistic about his chances at the national level, he also has his mind on even loftier long-term goals, thanks to his training. “Maybe one day, later on down the road, I’ll have my own business. Maybe, this trade will be something I can share with my two sons. That would be nice.”

SRTC offers over 150 degree, diploma, and certificate programs that are designed to get you quickly into your desired career, and 27 general education courses that transfer to the University System of Georgia institutions and 19 private colleges and universities in Georgia. SRTC has instructional sites located in Ashburn, Cairo, Camilla, Moultrie, Thomasville, Tifton, and Sylvester for the convenience of our students. The College is accredited by the Southern Association of Colleges and Schools Commission on Colleges (SACSCOC). SACSCOC is the regional body for the accreditation of degree-granting higher education institutions in the Southern states. For the most up-to-date information on registration, class dates, and program offerings, log on to www.southernregional.edu, or call (888) 205-3449.