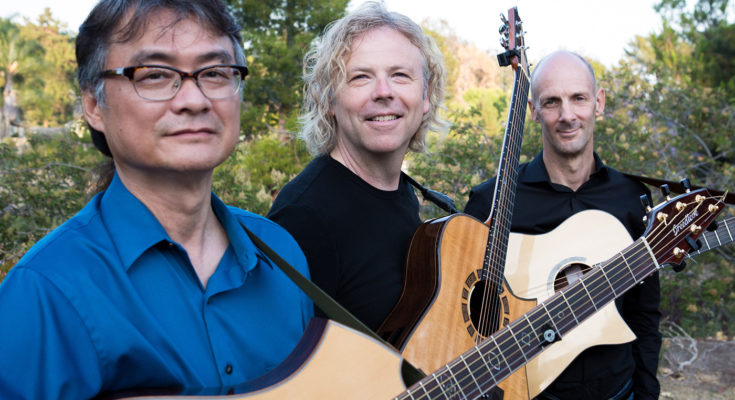 The Fifth Annual Carter Arts and Lecture Series is pleased to invite the public to a free performance by the California Guitar Trio on Tuesday, Feb. 13, beginning at 7 p.m., in the Charles H. Kirbo Regional Center auditorium.

The universe of guitar knows no boundaries for The California Guitar Trio. Since 1991, the group has enthralled listeners with a singular sound that fearlessly crisscrosses genres. The trio’s questing spirit drives it to explore the intersections between rock, jazz, classical, and world music. It even throws in the occasional surf or spaghetti Western tune for good measure.

Comprised of Bert Lams, Hideyo Moriya and Paul Richards, the group has established a unique, personal connection with audiences. In addition to dazzling musicianship and interplay, The California Guitar Trio’s (CGT) shows are full of captivating stories and humor that enable concertgoers to feel like they’re part of the music, not just spectators. In fact, the group’s goal is to transcend their instruments, so people focus on the music first, and its considerable technical prowess a distant second.

CGT’s 16 albums, streamed over 65 million times on Pandora, offer diverse snapshots of the group’s mercurial muse. The trio’s most recent release Komorebi showcases its acoustic side, with beautiful lush originals and innovative cover arrangements of Beatles, Beach Boys and more. Other highlights include Masterworks and album of classical works, with expansive takes on Bach, Beethoven, Arvo Pärt, and Schubert. Andromeda, which combines their many influences into a visionary album of original material; CG3+2, an exploration of kinetic rock territory in collaboration with bassist Tony Levin and drummer Pat Mastelotto; and Echoes, which reimagines timeless material by artists such as Mike Oldfield, Penguin Café Orchestra, Pink Floyd, and Queen.

The trio’s output has made a major global impact, having served as the soundtrack for Olympics coverage, and programs on CNN, CBS, NBC, and ESPN. They have fans in high places too. NASA used their music to wake the crew aboard the Space Shuttle Endeavour.

CGT’s lineup is truly the sum of its distinct parts: A Utah native now residing in Los Angeles, Paul Richards immersed himself in rock, blues, jazz, and folk during his early days and while attending The University of Utah’s jazz guitar program. Bert Lams, originally from Belgium, graduated from the prestigious Royal Conservatory of Music in Brussels, specializing in classical guitar. Tokyo-born Hideyo Moriya began his guitar journey with surf music and British rock, before relocating to Boston to study at Berklee.

All three felt the call to push themselves to the limit by enrolling in Robert Fripp’s challenging Guitar Craft courses, where they first met in 1987. They went on to tour together as part of Fripp’s League of Crafty Guitarists, before forming the California Guitar Trio in Los Angeles four years later.
Recently, the trio expanded its collaborative possibilities by working within a six-guitar format with the Montreal Guitar Trio. During these groundbreaking, highly-entertaining shows, the acts perform inventive arrangements of each other’s repertoire, and new music for guitar sextet.

Twenty-six years and 1,800 plus gigs later, the CGT remains intensely committed to explore, evolve and communicate a wide-ranging musical worldview.